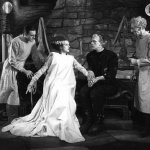 The Bride of Frankenstein is a sequel to Frankenstein (1931) and begins where the previous movie ended, with the fire and collapse of the windmill atop the monster. As we quickly discover, Frankenstein’s monster is very much alive, but is badly burned and is now deathly afraid of fire. While the sequel promises a “bride”, her re-animation does not occur until late in the film, and after we witness the monster, played by Karloff, learning to speak and become somewhat friendly, at least with the blind man who invites him into his home. Despite the dramatic improvements in his social skills, the monster is shunned by his bride. In response, he kills her, himself and the good doctor who re-animated her (Klaus Ming March 2009).