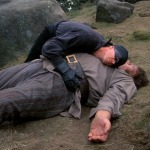 The Princess Bride is a timeless fairy tale that contains just about everything one could ask for including “Fencing, fighting, torture, revenge, giants, monsters, chases, escapes, true love” and “miracles”. Told as a bed-time story by a grandfather to his sick and initially uninterested grandson, the Princess Bride is a film that has a wide appeal for its great screenplay and amazing performances by an incredible cast of truly likable characters. The key to this film’s success is the underlying relationship between Peter Falk as the grandfather and his grandson played by Fred Savage who occasionally interrupts the telling of the tale which serves to strengthen their relationship and provide another level of comedy  (Klaus Ming June 2009).