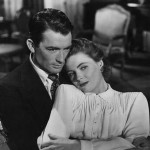 The title of this well-written and overtly political film “Gentleman’s Agreement” is presented as a euphemism for remaining silent in a public situation where disparaging remarks are made about an ethnic or minority group. As a means to explore antisemitism in post-war America, this film presents Gregory Peck as an undercover journalist who pretends to be Jewish in order to write the “story” in a news magazine. Surprisingly, after 50+ years the movie’s message remains as valid today as it did then. While North American society may have become more “tolerant”, it can be argued that the “Gentleman’s Agreement” is still in effect (Klaus Ming December 2009).