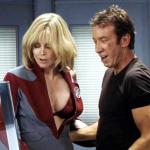 Galaxy Quest is a hilarious and well-scripted pop-culture science-fiction-themed movie that is loosely based on the Star Trek television series and the enthusiastic fans who attend conventions dedicated to their favorite science-fiction shows. The “television” performances of the crew of the NSEA Protector are brilliantly played in much the same manner as the over-the-top performances of the 1960s shows on which they are based. Equally up to task are the excitable Galaxy Quest-obsessed Thermians who believe the show’s intergalactic adventures are actual “historical documents”. Although the film’s strength is in the parody, it is also surprisingly entertaining as science fiction – when the make-believe intergalactic cast is challenged by “real” reptilian-looking humanoids bent on their destruction (Klaus Ming January 2010).