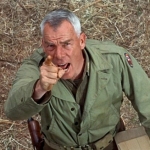 The Dirty Dozen is an outrageous WWII film filled with largely despicable but oddly likeable characters, most of who are death row inmates given reprieve from their sentences for volunteering in what is likely to be a suicide mission into Nazi occupied France. Lee Marvin plays Major John Reisman, a quintessential tough guy and leader of this group of misfits who have nothing to lose but their lives. With the feel of a martial arts film, which often provides lengthy training sequences, the story of The Dirty Dozen is told in three parts, the first of which is the selection of the prisoners, the second, their training, and in only the third act do we see the original inglorious bastards at work (Klaus Ming October 2010).