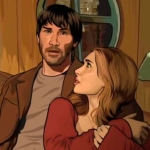 Set in a near future dystopian society whose populace suffers from widespread drug addiction and all-pervading police surveillance, A Scanner Darkly is an intriguing film based on the 1977 novel by Philip K. Dick. Filmed in live action, it was then animated over top of the original film, giving it an almost life-like and surreal quality which complements the paranoia of the film’s drug addicted characters. As classic style science fiction, in which society has been hijacked by a corrupt state, A Scanner Darkly is reminiscent of films such as Fahrenheit 451 (1966) and Nineteen Eighty-Four (1984) – all of which never found a widespread popular audience – despite their popularity and importance as literary works (Klaus Ming October 2010).