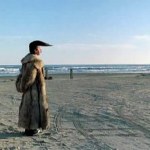 As a commercially unsuccessful Russian band, the Leningrad Cowboys are taken to America by their unscrupulous and tyrannical road manager who lives off the avails of the few gigs he is able to procure for his magnificently coiffed backwoods band. In attempt to gain popularity they must learn “rock and roll” among a number of other popular musical styles that will appeal to Americans. The result is ridiculously funny cross-country road movie, complete with a cameo appearance by Jim Jarmusch who sells them a used Cadillac on which they place their frozen “dead” guitarist. As a forerunner to Borat (2006), the Leningrad Cowboys offer a lot of fun music and deadpan Finnish humour at its finest (Klaus Ming December 2010).