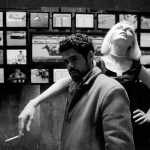 Angel-A is a comedic romantic fantasy in which a most unlikely angel comes to the aid of Andre – a small time crook whose life is threatened by the mob over bad loans.  In pledging her life to Andre, after he rescues her from an attempted suicide, the stunningly beautiful and mysterious Angela proceeds to earn the money he needs through prostitution. Somewhat more conventionally, she also attempts to convince Andre that his life is worth living, only if he can muster the courage to believe in himself. As a modern version of It’s a Wonderful Life (1946), Angel-A is a humorous and surprisingly touching take on a well-worn story (Klaus Ming December 2010).