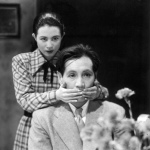 Set in post-war Hokkaido Japan, The Idiot is Kurosawa’s adaptation of Dostoyevsky’s nineteenth-century classic novel about human behaviour as expressed in the relationships surrounding Kameda – a man with childlike qualities who deeply affects the lives of the people he meets. The film’s disjointed nature and use of inter-titles and voice overs is a result of studio orders to shorten the film. Unfortunately The Idiot’s full potential is likely never to be realized as no copy of the original four and a half hour epic is known to exist. The often trance like performances of the main characters and the use of prolonged close-ups lends a dreamlike quality to much of the film – which subtly provides time to reflect on the character’s intricate relationships and on the broader themes of the story. The Idiot also marks an important stylistic shift from Kurosawa’s realistic approach and sociopolitical commentary toward broader explanations of humankind through the use of myth and legend (Klaus Ming January 2011).