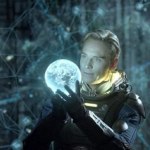 As the prequel to the vastly superior science-fiction horror film Alien (1979), Prometheus is comparatively a dull space adventure with decent special effects, but which has little to offer on its own merit. Following the well-worn von Däniken “Chariots of the Gods” theme for humanity’s extraterrestrial origin, we discover the origins for the Aliens while further dealing with a “bad” robot which has the company’s interests above his human shipmates. Despite the predictable mayhem which ensues, the lack of likeable or even mildly interesting characters makes it difficult to be engaged by this mildly entertaining movie (Klaus Ming June 2012).