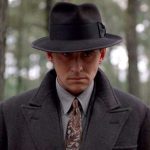 Miller’s Crossing is an engaging prohibition-era modern film noir about a power struggle between an Irish American mob-boss named Leo whose authority is challenged by Caspar, an Italian rival who decides to kill a bookie under Leo’s protection. The film’s protagonist and anti-hero is also Leo’s right-hand man, who plays both sides to protect his own interests, which includes Leo’s girlfriend. An intelligent screenplay, interesting characters and a great looking film, Miller’s Crossing is an underappreciated film which deserves a second look (Klaus Ming June 2012).