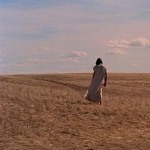 Visually stunning and reminiscent of an Andrew Wyeth painting known as Christina’s World, Days of Heaven is a sorrowful drama set at the beginning of the twentieth century on an expansive Texas farm. The story follows Bill and Abbey – a poor couple from Chicago who pretend to be siblings and Linda, Abbey’s younger sister, whose informal narration fittingly serves in place of dialogue for much of the film. As a tragic love story, Days of Heaven plays as a dream – a fondly remembered fragment of a young girl’s life which unexpectedly comes to a close as quickly as it began (Klaus Ming September 2011).