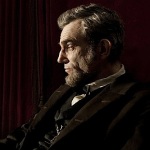 Lincoln is a masterpiece of historical drama which might be more aptly described as “writing history with lightning” – as originally attributed to President Woodrow Wilson after a screening of D.W. Griffith’s The Birth of a Nation (1915) – and probably the biggest historical fiction before Abraham Lincoln Vampire Hunter (2012). Spielberg’s Lincoln focuses on the political wrangling in both the President’s Cabinet and in the House of Representatives over the eventual passing of the Thirteenth Amendment to abolish slavery. Daniel Day-Lewis give a wonderfully nuanced performance which reflects the incredible emotional and physical toll which this period took on Lincoln. Like the man himself, the film is patiently delivered and deliberately-paced which culminates in an exceptionally emotional conclusion – which fittingly was not his assassination, but rather the passing of this significant legislation (Klaus Ming November 2012).