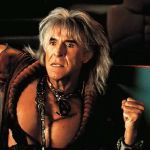 Following the lumbering original film, Star Trek: The Motion Picture, The Wrath of Khan is a triumphant return to the swashbuckling style which made the original television series so popular. It also reintroduced the character of Khan Noonien Singh, who Kirk exiled in an episode of the television series. Most notably, this film is best remembered for the controversial move to kill off Commander Spock, which led to the Search for Spock in part three of the franchise. Some of the special effects, which were not borrowed from the original film, are by today’s standards still pretty laughable (e.g. the prosthetic ear). Despite the deficiencies, The Wrath of Khan is arguably the best film of the original franchise (Klaus Ming January 2013).