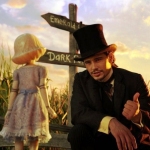 As a prequel to The Wizard of Oz (1939), Oz the Great and Powerful provides a simple, yet fascinating back story to one of the most beloved films of all time. It also directly and indirectly references the original film in a number of ways, most notably through the use of a black and white opening sequence. Likewise, it cleverly foreshadows Dorothy and company and their adventures that are to follow. The film’s fantastical look, despite being largely digitally, is purposely surreal and in keeping with the land of Oz originally devised by Hollywood in 1939. Despite the underlying parallels in look and logic, the film’s lack of memorable musical numbers is unfortunate, not to mention that the original flying monkeys are better than their 2013 CG replacements (Klaus Ming March 2013).