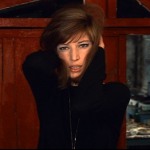 The Red Desert is the story of a young woman who is said to have physically recovered from an automobile accident, but who has been left with unexplained emotional problems which leave her in a most unsettled and paranoid state. The film’s limited palette of colours enhance the bleak modern industrial landscape which amplifies Giuliana’s sense of detachment with others. Wandering almost aimlessly, the characters in this film seem to be doing little of consequence in a landscape that is practically devoid of life. If this is a statement on modernism and industrialization and our alienation of living in a world without natural beauty, Antonioni’s film might be considered a triumph, though it may also have had the effect of alienating audiences who were looking for something more conventional (Klaus Ming March 2013).