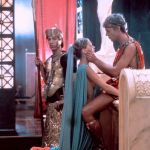 In employing mainstream actors in a film which also features a plethora of X-rated material, Caligula was a source of controversy both during its production and after its release. Widely criticized for its explicit violence and sexuality, the film also suffers from competing visions and production interests. Billed as an historically based drama about the rise and fall of the Roman Emperor Caligula, the film’s attempt to be controversial is largely ridiculous by today’s standards and remains a largely boring production in soft focus and poor lighting (Klaus Ming June 2013).