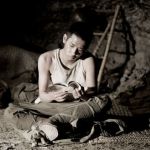 A unique American war film insofar as it is told from the perspective of Japanese soldiers, the overwhelming majority of which were killed or went missing in action during the battle for Iwo Jima. A tragic story, for both sides, the soldiers stationed on the island knew that they were expected to fight to the last man, as this was the first attack on Japanese soil, and that Iwo Jima would be the launching point for an American invasion of mainland Japan. Beautifully photographed and masterfully directed, Letters from Iwo Jima is arguably one of the finest war films ever made (Klaus Ming July 2013).