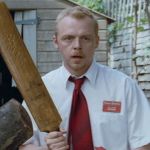 Shaun of the Dead is a comedic post-apocalyptic buddy movie about a small group of friends who attempt to find refuge in their local pub while dealing with the challenges of family, love and the living dead. Recently dumped by his girlfriend, Shaun hopes to reconcile their relationship during a zombie outbreak which leads to a hilariously gory journey through the streets of London. Though a parody of the zombie genre, Shaun of the Dead is a surprisingly good horror film in its own right, not to mention that it is also a hilarious comedy (Klaus Ming September 2013).