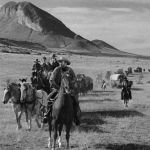 A surprisingly sophisticated story, Red River is about a Texas rancher and his adopted son who attempt a momentous cattle drive against seemingly impossible odds. Wayne’s classic tough guy character is contrasted against Clift’s modern version of the cowboy in this classic American western. As the grizzled voice of reason, Brennan’s colourful character is a scene stealer as he attempts to keep the peace in this in this suspenseful and highly entertaining father and son melodrama (Klaus Ming May 2014).