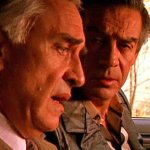 Crimes and Misdemeanors is an existential black comedy about two separate stories that briefly intertwine by coincidence. In one, a husband’s infidelity prompts him to take desperate measures to ensure that his emotionally distraught mistress does not reveal their relationship to his wife. In the other, a despondent filmmaker, who has his own marital issues, loses the women he desires to his more successful brother-in-law. Employing flashbacks and classic movie clips, Allen weaves a clever tale of love, deceit, murder, and guilt in this witty exploration of film making and morality (Klaus Ming March 2015).