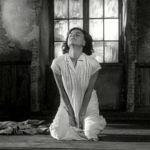 Through a Glass Darkly is an existential essay centered around a young woman named Karin who suffers from schizophrenia. Recently released from hospital, Karin is accompanied by her husband, brother and father to a remote island for a brief vacation. Through their conversations we learn more about Karin’s condition and the impact it has had on the others, as well as a few of their own personal struggles. Their brief story is employed by Bergman to describe life’s loneliness and perhaps even a way to get through it, though not necessarily unscathed (Klaus Ming March 2016).