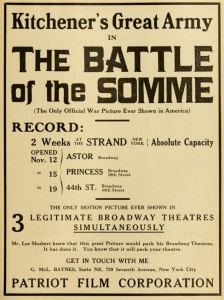 I recently attended a lecture by film historian Dr. Seth Feldman on how the movies have portrayed the First World War over the last 100 years. During that evening, I was introduced to The Battle of the Somme (1916), a documentary film made under the direction of the British government which garnered much publicity for its depiction of the brutality of the war. Some of this controversy was captured in the November 1916 edition of The Moving Picture World which stated that the film was banned by censors in Vancouver Canada, for fear that Western Canadian citizens wouldn’t have “stomachs enough to enlist after seeing the horrors of real war” (p.1054). Despite the fact that King George V had recommended that the public see this film, so “that they may have some idea of what the army is doing, and what war means”, it was noted that “the official British film epic which has been acclaimed as the greatest war picture ever taken, has met the usual fate at the hands of the British Columbia board of censors”. It is somewhat ironic that the censors took this stance, when the film was clearly a pro-war propaganda tool (Klaus Ming May 2016).