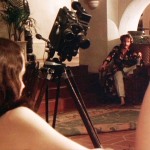 Inserts is a little-known film about a washed-up silent film director who has a “six-picture deal” to make stag films for a bootlegger. Set almost entirely in the home of the “Boy Wonder”, this is a dark quirky melodrama that has stage-like qualities. With playful references to early cinema, Inserts is full of insightful nostalgia, but without the sentimentality of other films about this era in Hollywood. Although it was rated X for its nudity and coarse language, which probably accounts for its anonymity, Inserts is a little gem of a film that was decades ahead of its time (Klaus Ming July 2016).