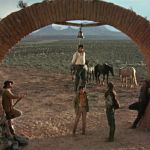 Perhaps Leone’s finest “Spaghetti Western”, Once Upon a Time in the West is a meticulously detailed and gorgeously shot and scored epic feature film. Cast as a sadistic villain, Henry Fonda’s character is the antithesis of the hero persona that he had cultivated for decades in numerous Hollywood productions.  This is a deeply nostalgic film in which Leone pays homage to the Western genre at every turn, while maintaining his trade-mark style of film making (Klaus Ming September 2016).