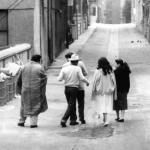 The Exiles is a sympathetic documentary-like narrative of the day-to-day experiences of a group of young Native Americans living in Los Angeles. Set to rock and roll music, the group’s activities, which include drumming and dancing are integrated into their urban lifestyle. As a social document, The Exiles offers an important snapshot of the hopelessness of a segment of Native American society during mid-twentieth century (Klaus Ming October 2016).