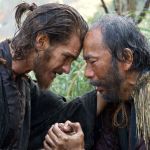 Silence is a harrowing historical drama about a pair of 17th century Jesuit priests who travel to Japan to find a missing missionary who is believed to have renounced the Church. As a story about religious persecution, this is Scorsese’s deepest exploration of spirituality since The Last Temptation of Christ (1988). Despite the explicit portrayal pain and suffering suffered by the faithful, which is intended as proof of the power of religious faith and iconography, Silence is never completely engaging as a story (Klaus Ming February 2017).