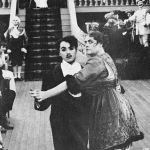 Featuring a who’s who of silent comedy stars, including the Keystone Cops, Tillie’s Punctured Romance is notable as cinema’s first feature-length comedy film, and the last that Chaplin would make, in which he didn’t either write or direct. As the film’s villain, Charlie seems oddly out of character, having yet to invent The Little Tramp. Nonetheless, it is Canadian-born Marie Dressler who gets most of the laughs in this amusing and markedly slapstick kick-in-the-pants styled comedy (Klaus Ming April 2017).