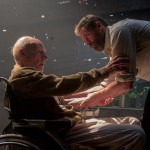 Hugh Jackman gives a notable performance as Logan, one of a handful of aging X-Men who discover Laura Kinney, an 11-year-old girl who has similar powers. Learning that she was grown from mutant DNA and raised as a weapon, Logan attempts to save Laura from the biotech company who wants her destroyed. Complicating his efforts, he must attend to Charles Xavier, whose telepathic powers are out of control. Perhaps the best X-Men movie to-date, Logan is a fitting farewell to Jackman’s portrayal of Wolverine (Klaus Ming August 2017).