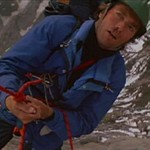 The Eiger Sanction is a mountaineering-themed spy action thriller based on Rodney William Whitaker’s 1972 novel of the same name. As a retired contract killer art historian-mountaineer, Professor Hemlock is coerced into making one last “sanction” as a member of an international mountaineering team. Climbing the north face of the Eiger in the Bernese Alps, Hemlock neither knows his target, nor whether he himself is a target. Despite a somewhat confusing plot, the climbing sequences are highly realistic owing to the fact that Eastwood did his own climbing and stunt work (Klaus Ming January 2019).