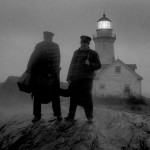 A visually-striking psychological horror film set in the late 19th century, this is a story of two men tending an isolated lighthouse on a barren rain soaked rock. The elder, Thomas Wake, is an old superstitious seaman who incessantly belittles his younger partner, Ephraim Winslow. Begging to tend the light, Winslow is relegated to the most menial of tasks by Wake. Fuelled by isolation, alcohol and the call of a mermaid, their contempt for one another spirals out of control, leading us to follow Winslow into madness and the “beauty” of the light (Klaus Ming January 2020).