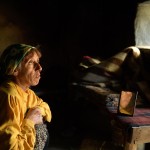 Honeyland is a mournful environmentally-themed documentary about the life of Hatidze Muratova, a woman and her elderly mother who live in an isolated rural village in Macedonian where she makes a few extra Euros collecting honey from beehives that she lovingly attends. The women’s lives are interrupted by a family of nomadic cattle herders who take up residence in their community. Motivated solely by profits, the Sam family try their hand at beekeeping, but with disastrous results for all concerned (Klaus Ming February 2020).