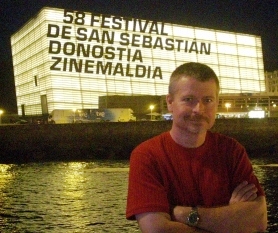 1. I’ve long enjoyed Indiana Jones movies, and despite being a real-life archaeologist, I more closely identify with Steve Zissou.

2. If 3D movies really are the future of cinema, I can identify with the proponents of silent film who saw talkies as a gimmick.

3. The 1920s is the decade of the 20th century which I’d most like to attend a film premier. And what would be my first choice? Nosferatu, Eine Symphonie (1922).

4. Ever since my very first rock collection, I’ve always have been actively involved in collecting something. Not surprisingly, movies are at the top of my current obsession.

6. I can’t seem to get enough movies about movies. Some of my favorites are Sunset Boulevard, Targets, The Player, and Shadow of a Vampire.

7. Thanks to a lot of late night television watching as a child, I knew by the age of eight that W.C. Fields was the funniest comedian in film – at least until I discovered Peter Sellers.

8. Despite it being a “holiday classic” I’ve always thought It’s a Wonderful Life (1946) had more in common with Rod Serling’s Twilight Zone.

9.  Though not being a particularly big horror fan, I think that the bouncing red ball in The Changeling (1980) is one of the most effectively frightening scenes in the genre until I saw the powder footprints in Paranormal Activity (2009).

10.  As a child of the 1960s and a huge fan of science fiction film, I remain disappointed that I’ve yet to travel to the moon! Though much of my disappointment has recently been relieved by Fish Story (2009) and Chappie (2015).