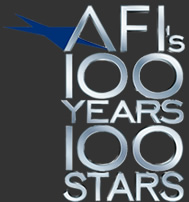 In 1999, the American Film Institute (AFI) announced the 50 greatest American screen legends, voting Katharine Hepburn and Humphrey Bogart into the number one spots. AFI defined an American screen legend “as an actor or a team of actors with a significant screen presence in American feature-length films whose screen debut occurred in or before 1950, or whose screen debut occurred after 1950 but whose death has marked a completed body of work”. According to AFI.com, the list was selected by artists, historians, critics and other cultural leaders from the American film community who chose from a list of 250 male and 250 female actors as compiled by AFI historians. Commencing today with Elizabeth Taylor, 100 word or less biographical summaries will be added for each screen legend. Additional biographical pieces covering actors not in the Top 50 will be composed upon completion of the list (Klaus Ming March 2011).