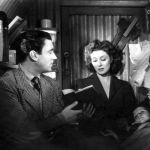 Mrs. Miniver is a celebrated wartime melodrama based on Jan Struther’s 1940 novel about a well-to-do rural British family living through WWII. This is clearly a propaganda film which brought home the war to Mrs. Miniver’s family, and in so doing, celebrated the sacrifices made on England’s homefront. Used to boost the morale of America as it entered the war, the film overplays the British “stiff upper lip” as Mrs. Miniver and company remain largely unfazed by the bombs, death and destruction that surround them (Klaus Ming November 2016).